My experience on the final day of the LTUE conference

The final day at LTUE was especially enjoyable because Brandon Sanderson joined us for a few panels. He's my major source of inspiration for my own writing and this was my first opportunity to see, hear, and talk with him in person. So while I've always been one to sit front and center, I made extra sure I could do that for his sessions (and lots of other people did as well).

The Beginner's Guide to Self-Editing

You've finished your first draft. Congratulations! Now it's time to tap off your writer's cap and look at your novel with an editor's eye. This presentation will show you how to shape that fresh draft into the manuscript you want to share with the world.

This was a two hour session that had a lot of great tips and advice. Most of it was reinforcement of things that I knew already, but much of it was really helpful. There were some really practical pieces of advice and suggestions. Here are some of the bits of advice from my notes:

"Having tension always in your book means you have tension never in your book." – @kelsythompson #ltue #amwriting #writingtips pic.twitter.com/ybVaiOhksl

One of my favorite parts of Kelly's keynote was when she said this:

"Writing is not easy, so give yourself a pat on the back." - @kellybarnhill pic.twitter.com/gnSPKx668d

Writing is totally hard. But it's so rewarding and well worth all the effort.

Kelly told a few stories from her life. She saw ghosts and had some supernatural experiences that influenced her and inspired her in the writing of her fairy-tale stories.

I really appreciated Kelly's positivity and energy throughout the conference. She was a wonderfully approachable author and I enjoyed chatting with her about writing craft.

This was the first session with Brandon as a member of the panel and I really enjoyed it. I haven't read books by the other authors on the panel, but I know that Brandon has incredible settings that really make his books come alive.

There was a part of the conversation that went to how much of the world do you tell to the reader about and when do you tell them. The advice given was that often it's useful to start with the character and share what matters to them as it matters to them. I think an exception to this is when you need to foreshadow something. But even that is not really an exception but really you just make that thing important to the character at an earlier part in the book and you get natural foreshadowing.

In Shurlan, there's a part of the magic system that the characters don't know about and I want to reveal later. I don't want to make it feel contrived and like I was getting bored with my magic system and decided to add something later on, so I asked the panel what they do about something like that and Brandon Sanderson said that he likes to treat magic systems like regular science works in our world. We know there are things we don't know, but we're confident in things we think we know. Then we regularly find that what we thought we knew isn't quite accurate. So long as this comes across in the writing of your magic system, then new discoveries don't feel contrived (especially if it's properly foreshadowed).

At the end, I got right up and took my opportunity to get a signature from the author that serves as my biggest inspiration in the world.

I don't read books, I listen to them, so when I got the opportunity to get a signature from @BrandSanderson, I had him sign my laptop ✍️💻 #ltue #AmWriting #WritingCommunity pic.twitter.com/d07NKSNm9f

The Spark That Lit the Fire: Major Influences on Major Authors

Many major authors get their inspiration from somewhere. Learn about the major works that gave these panelists and other published authors the vision and drive to explore new worlds.

I enjoyed this session. There were a few things that were helpful about where authors derive inspiration. Sounded like children were a great source of inspiration and ideas for these authors. It was fun to hear about the heroes of heroes.

Brandon Sanderson told a story about when he was in the 8th grade. He wasn't much of a reader, but his teacher recommended he read Dragonsbane by Barbara Hambly. He went to the library and looked up books around the same title (alphabetically) and luckily found two more "Dragon" books which continued to capture his interest. Interestingly, they all had covers illustrated by Michael Whelan and he decided to read more books with covers illustrated by Michael. He even got his parents to buy him a \$60 art book from Michael that had some book covers and other fine art. One such creation was this work titled "Passage: Verge" which served as inspiration for the seons in Elantris: 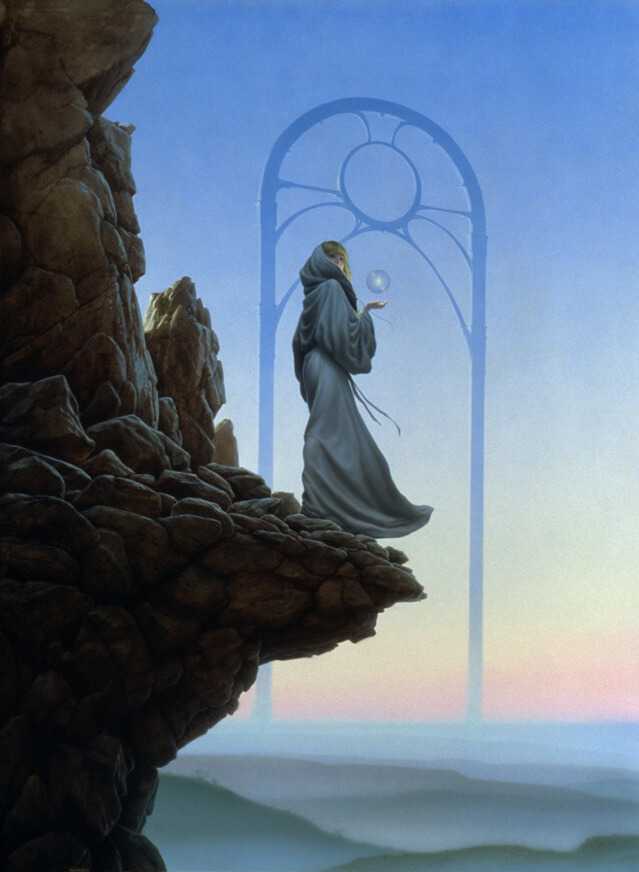 I decided I wanted to write a novel in August 2018, just a few months ago. Since then, I've listened to countless hours of the Writing Excuses podcast. So I was really looking forward to seeing a live recording of four episodes of the podcast.

I enjoyed the conversations and when the episodes are published you will as well, but I want to mention one thing that was really impactful to me.

Dan Wells son and daughter were helping move the single microphone around the panelists. Dan's son was helping in the middle of a recording and got up and silently switched with his sister, then walked out of the room. Dan watched him go with his brow furrowed, then (still during show) took off his recording microphone and walked out to go check on him. What is impactful to me is I think if I had been in that same situation I probably would have waited to check on my son after the recording. I was impressed that Dan would stop what was pretty important to go check on his son who is ultimately important. I still have a lot to learn.

I had an awesome time at the conference. I learned a lot and I'm glad that I had the opportunity to attend and meet so many awesome individuals. Especially my personal writing inspiration, Brandon Sanderson:

This is multi-part of a series of posts about LTUE 2019:

Kent C. Dodds is a JavaScript software engineer and teacher. He's taught hundreds of thousands of people how to make the world a better place with quality software development tools and practices. He lives with his wife and four kids in Utah.